CII believes shareowners should vote their shares with a proxy card showing all director nominees.

When a director election has more nominees than available board seats, shareowners typically receive two versions of the proxy card: one from the company and one from the shareholder who nominated the alternative candidate(s). Each card provides a unique list of nominees, neither list is complete, and shareowners are prohibited from using both cards to vote. Thus, depending on the combination of candidates a shareowner supports, he or she may be disenfranchised. 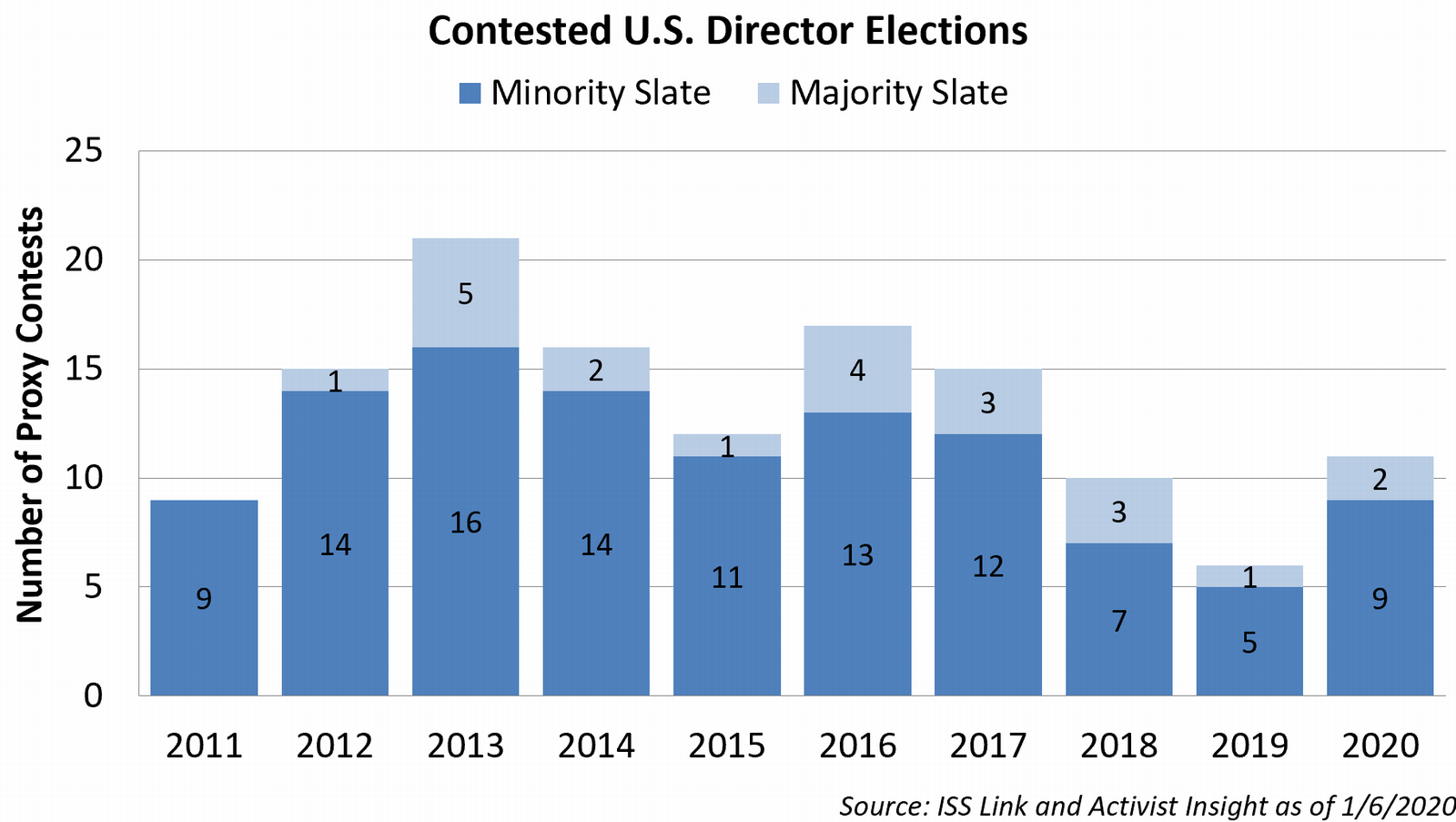 "Universal" proxy cards solve this problem by listing all duly nominated board candidates, allowing shareowners to vote for the precise combination of nominees they wish to represent them. That precision is vitally important in proxy contests, when board seats (and in some cases, board control) are at stake.

As of April 2021, the SEC appears to be on the verge of adopting a universal proxy rule. The SEC proposed a rule in 2016, about which CII has made available a brief FAQ. Since then the SEC Investor Advisory Committee and a special working group have added further support to the propoal's finalization.

The first  reciprocal universal proxy election in the U.S. occurred in July 2019 between Rice Team and EQT. (Although in 2018 Sandridge Energy circulated a universal card, the company did not grant the dissident the authority to do likewise.)

As shown in the graph (click to enlarge), contested elections are exceedingly rare in the United States. Based on recent contests going to a vote in the Russell 3000 index, the SEC's proposed rule would have no impact on 99% of director elections.

The SEC’s “bona fide nominee” rule, adopted in 1966, allows for some mix-and-match capability, but requires the opposing sides of the proxy contest to obtain consent before listing opposing candidates. Mutual consent is exceedingly rare, but an example occurred in 2019 when EQT's card listed identical candidates to dissident group Rice Team's card.The EQT contest illustrated the urgent need for the SEC to finalize a uniform rule, as the dissident card fell short of presenting the candidates with equal prominence.

The SEC’s 1992 “short slate” rule provides a carve-out from the consent requirement when a shareowner nominates candidates representing a minority of the board. In such cases, dissidents can list their preferred combination of shareowner and management nominees. But the short slate rule does not provide shareowners full “mix and match” capability. The rule proposed by the SEC in 2016 would correct this deficiency.